Let us consider these 2 scenarios. Mary is a fitness buff and suddenly realized she is pregnant. The early signs are unmistakable: nausea, dizziness, mood swings and occasional headaches. It’s totally unplanned and the only concern in her mind is how she would continue with her daily exercise regimen while pregnant. Is it feasible? How are the exercises going to affect her pregnancy.?

A Pregnant Mother in her Second Trimester

Philomena has just had a discussion with her doctor. He informed her that she is on the verge of becoming obese and advised her to lose some weight. She was in the process of losing some weight when she realized she had become pregnant. Again, it was not as if she had planned the pregnancy to the last detail. Her intention was to lose some weight and now it has happened. What is she to do?

The two scenarios are begging the question: Can a pregnant woman safely lose weight while pregnant?

Is Weight Loss during Pregnancy feasible?

Doctors want a situation where they could work with the patient in the area of weight loss long before they become pregnant. Weight gain is such a sensitive issue with most people that they don’t like discussing it, not even with a doctor.

In prenatal consultations, doctors would work with a small team of a dietitian, and an exercise instructor to ensure the patient gains a healthy weight loss before pregnancy sets in.

Weight management in prenatal consultations with the Doctor can only be done in planned pregnancies; in unplanned pregnancies, the patient has to shed the excess weight gain before delivery of the baby. If not, it could lead to a miscarriage or other complications during childbirth that could put the life of the unborn child and even the mother in jeopardy.

The incident of Obesity during Pregnancy

The incidence of Obesity is on the rise in the USA and around the world. Some people think it has become a pandemic. It is estimated that roughly 50% of pregnant women or even 1 in 4 of such women are either overweight or obese. Being overweight has little effect on your ability to get pregnant but being obese can deny you the prospect of becoming a mother. Excess weight has an effect on your hormones and can stop a woman from ovulating. If a woman does not ovulate, there will be no eggs for the sperm to fertilize. 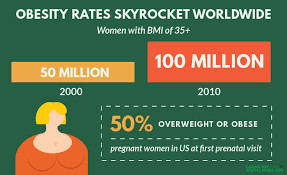 Obesity Rates of Pregnant women in the U.S.

Body Mass Index is a value derived from the mass ( weight ) and height of a person. A BMI of between 18.5 and 24.9 is ideal for a pregnant woman. A BMI of between 25 and 29.9 is overweight and can pose problems for child birth but a BMI of 30 indicates obesity and is problematic for pregnancy.

If an obese woman becomes pregnant, there are complications that have to be mitigated before child birth.

There are risks associated with Obesity for both the mother and the unborn child.

Pregnancy is made up of three trimesters of three months or 12 weeks each making a total of 36 weeks. Some pregnancies have been known to go up to 40 weeks though. In the first trimester, the pregnant mother experiences nausea or vomiting of food. This phenomenon is known as ‘Morning sickness’ and can cause pregnant women to throw up solid food in some cases. The expectation is that the mother would gain an additional 2 to 4 pounds in this stage of her pregnancy, so a loss of a few pounds is not something to worry about.

However, in the second and third trimesters, the pregnant mother is expected to gain weight simply because there is a baby growing in her womb who has nutritional needs that the mother has to meet. That’s in addition to her own nutritional needs. While it is not advisable to eat for two, as some pregnant women would want to do, it is certainly no time to start dieting and starving self and baby.

The National Institute of Diabetes and Digestive and Kidney Diseases prescribes this pregnancy weight gain guidelines for pregnant mothers during the entire period of the pregnancy.

While some loss of weight is allowed in the first trimester mostly through nausea and vomiting that is experienced by women in this stage of their pregnancy, weight gains of 11 to 35 pounds are expected depending on the BMI index of the pregnant woman. The highest net gain of 25 and 35 pounds goes to the pregnant woman with the least BMI while the least weight gain of 11 to 20 pounds goes to the woman with the highest BMI, the obese woman.

How to safely Lose Weight during Pregnancy

The best way to deal with weight in pregnancy is to manage it long before it occurs. The prospective mother would work with her doctor to track her weight and make sure it is brought within management proportions even before the pregnancy sets in. If need be, the Doctor would bring in a dietitian and possibly a fitness instructor who would work with the patient to achieve the desired results.

Use the National Institute of Diabetes and Digestive and Kidney Institute guidelines to help you in your weight management journey.

Fight your Cravings for Junk Food:

The would be mother may decide to ignore it especially if it is driven by hormonal changes but that may not be the best course of action. She may wind up with worse alternatives. She would be best served to indulge in it moderately because cravings can lead to additional weight gain over and above the allowable limits.

It starts with as little as giving up sweetened beverages for plain water and switching from unhealthy foods to healthier choices: apples for chips, almonds for candy, whole grains bread for white bread. Such minor changes in your food choices can help to drive down any weight gain.

Discuss your weight needs with your doctor because such needs differ from person to person and there is no one size fits all. In deciding on your weight needs, you need to take into consideration your unborn child who depends on you totally for their nutritional needs.

Do not fall for the thought that just because you are pregnant, you are eating for two and so need to double your ration. Eating more calories than you burn off is the most common cause of weight gain and you are best advised to avoid it like a plague.

Consider adding prenatal vitamins to your daily menu. They will make up for the deficiencies you can not get from your daily menu but they are in no way a substitute for your meals.

Whole-grain carbs like vegetables, legumes, potatoes and whole grains are to be preferred to refined carbs like white bread, white pasta and white rice 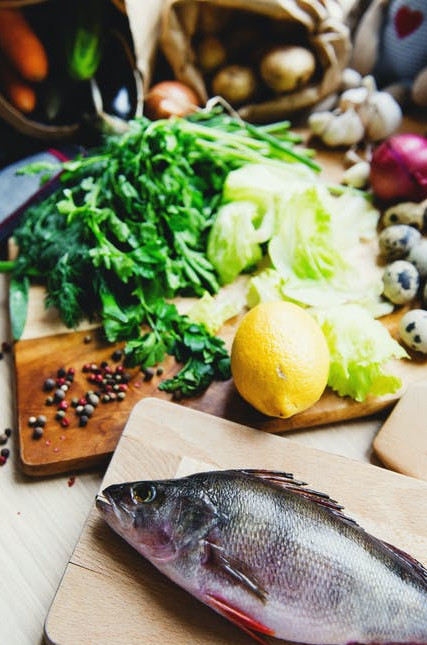 Consider eating in 5 to 6 small portions throughout the day instead of one large meal. As pregnancy grows, there is a tendency for the pregnant mother to be unable to eat full meal plates. She feels turned away by the sight of the food.

Pregnant women should eat no fewer than 1,700 calories per day.

Continuing most activities and exercises that predated the pregnancy is encouraged during the pregnancy period. Pregnant mothers are encouraged to participate in low movement exercises for at least 30 minutes a day. They should come up with their exercise regimen in consultation with their doctors.

They should engage in such low impact exercises as Walking, Swimming, Gardening, Jogging and Prenatal yoga.

These moderate exercises will help  pregnant women heal the aches that come with pregnancy. It will help them sleep better and even lose weight easily after birth.

For pregnant women especially for those with significant weight gain, the emphasis should be on weight management under the supervision of a doctor. While losing weight during pregnancy is a possibility, it is not to be encouraged especially as it can be avoided. It is only in cases of unplanned pregnancies that losing weight during pregnancy should be attempted and it has to be done under the expert supervision of a doctor, a dietitian and possibly a fitness instructor.